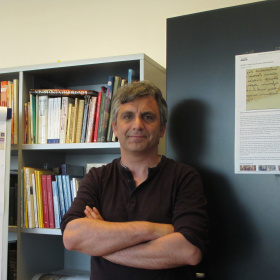 Theology and History of Christianity in the Middle East. Syriac Liturgy and Synods, with a specific focus on studying their manuscript heritage, within the scope of digital humanities.

He is a researcher at the University of Graz - Vestigia Manuscript Research Center. He teaches Syriac language at the Central European University in Vienna.

Since November 2017, he is the editorial coordinator for the forthcoming FSCIRE edition on the East and West Syriac synods COGD: Conciliorum Oecumenicorum Generaliumque Decreta (volumes V/1 and V/2).

He is the editor of Syriac studies for «The Digital Orientalist», and a member in the editorial boards for: «The Syriac Annals of the Romanian Academy» and «The Syriac Orthodox Patriarchal Journal». He is also an area editor and an advisor for Beth Mardutho - The Syriac Institute, New Jersey.

In 2020 he was a research fellow at Yale University - Institute of Sacred Music, New Haven, studying the Syriac manuscripts and archives at the Beinecke Library and the Yale Divinity School.

From November 2017 to December 2019, he was a senior post-doctoral fellow at FSCIRE, focusing on the Syriac synods according to their original manuscripts, and on the history of ecumenism in Syria.

Between 2015 and 2018, he taught the liturgical courses at the MA program of Syriac Theology of Salzburg University. He has been also a guest lecturer on Christianity in the Middle East at the Institute of Ecumenical Theology and Patristics at Graz University, in addition to several summer schools and workshops on Syriac and Arabic manuscripts in Europe, United States and the Middle East.

Between 2014 and 2016, he was a postdoc researcher at the University of Graz - Vestigia Manuscript Research Center, editing the Syriac liturgical texts of Anaphoras according to manuscripts.

In 2013 he defended his PhD thesis on Syriac liturgy at the Holy Spirit University of Kaslik - Lebanon, which was followed by postdoctoral fellowships in United States and Europe. In 2008, he obtained his MA degree in General Theology from St Vladimir’s Orthodox Theological Seminary, New York, USA.

He is co-editor of volumes V/1 and V/2 of COGD: Conciliorum Oecumenicorum Generaliumque Decreta (Corpus Christianorum), Synods of the Syrian Orthodox Church and Church of the East, Turnhout, Brepols (forthcoming).

E.A. Ishac, Being Christians together? The Situation of Ecumenism in the Middle East. An Institutional Perspective, in Thinking about Christian Life in the Turmoil Times of the Middle East, eds. M. Tamcke, Göttingen, C. Rammelt, 2020, pp. 67-94.

12-15 June 2018, Syriac Liturgical Manuscripts in Garshuni, The Future of Syriac Studies and the Legacy of Sebastian P. Brock, Sigtuna.

7–9 February 2018, Liturgy in the Time of Mor Severus, Severus of Antioch and his Search for the Unity of the Church: 1500 Years Commemoration of his Exile in 518 AD, University of Salzburg. Salzburg.