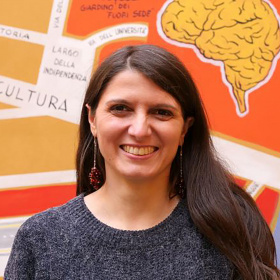 In 2021, she obtained a PhD from the Giuseppe Alberigo European School for Advanced Religious Studies (FSCIRE), with her thesis entitled The History and Policy of the Department for External Сhurch Relations of the Moscow Patriarchate: The case Of Ukraine (1989-2009).
She studied at the University of Naples L’Orientale; her MA thesis, which she completed in 2015, analyzed the concepts of modernity, modernization and democracy in the European Union and Russia in the contemporary age. It was supervised by prof. A. Pierucci and prof. F. Bettanin. During the academic year 2013-2014, in the field of the student exchange program of the Italian Minister for foreign Affairs, she spent three months at the Lomonosov Moscow State University. In addition, she had an Erasmus internship at the Centre for EU-Russia Studies (University of Tartu) where she collaborated with Professor E. Berg on his research on de facto states and relations of the United States with Taiwan and the Transnistria.
From 2015 to 2016, she worked at the Italian Institute of Culture in Ljubljana, initially as part of the Erasmus Traineeship Program and then as full-time employee assigned to the management of the library and language courses. In 2017, she held a two-month internship at FSCIRE, where she collaborated with Davide Dainese on the work for volumes IV/1, IV/2, IV/3 of Conciliorum oecumenicorum generaliumque decreta.
She spent two periods of study and research at the Center for the Study of Religion of the Russian State University for the Humanities: in 2018 (three months) and in 2019-2020 (eleven months)

1-4 December 2019, The Russian Language Ambassadors in the World project and the Cultural Diplomacy of the Russian Federation, Panel Methodological workshop 1. “Where and how should we speak mother tongue”, UNESCO Chairs Conference, Dialogue of Civilizations and Cross-Cultural Cooperation. Multilingualism as a factor to maintain the ethno-cultural diversity: educational strategies, Moscow Pedagogical State University, Moscow.

09-11 June 2019, Church-State interplay in Post Soviet Russia, and the Image of the West. Panel, Religion, Society and Politics, Forth Annual Tartu Conference on Russian and East European Studies, Communities in Flux: Rethinking Sovereignty and Identity in an Era of Change, University of Tartu, Estonia.

24 October 2017, Religion and the Russian Revolution, Conference Reformations, modernities, orthodoxies: International Colloquium, The Institute for the Study of Culture and Christianity, Rome.