In via in saecula

In the last days of December 1685, Jesuit Father Philippe Couplet, vice provincial of the Society of Jesus for China, stopped at the court of Grand Duke Cosimo III de’ Medici in Florence on his way from Rome to Paris. During this stop, Father Couplet presented the Grand Duke with a collection of precious Chinese texts on agronomy and physics, brought to Europe from China and testifying to the close relationship built up by the Jesuits with the cultural reality of the Celestial Empire. Together with these texts, Couplet also donated to the Grand Duke a small Latin manuscript, a little Bible found, according to the Jesuit himself, among the possessions of a noble Chinese family that had kept it for almost four hundred years, since the time of the Yuen dynasty and Marco Polo. This small manuscript, preserved today in the Biblioteca Medicea Laurenziana, bearing the codex Pluteo 3, capsula 1, and called Marco Polo’s Bible, represents a singular and unique testimony to the experience of an encounter between peoples and religions, between distant cultural worlds, transmitted mainly through the memories and narrations of Western religious who had been witnesses and protagonists.

The small Bible experienced these events, remaining in China as a sort of reverse ‘chinoiserie’, a vestige of the presence of a Latin Christianity that would return only three centuries later with Matteo Ricci. The manuscript, a “hand bible” of small dimensions, merely 17 x 13 cm, dates back to 1230-1240, and the characteristics of the Latin text, the decorations of the initials, the processing of the parchment and the inks used indicate its place of origin as the region of Paris, an area that in those years saw a large production of manuscripts of this kind under the impetus of the development of the university, on the one hand, and the growth of mendicant orders, on the other. It is likely that the Florentine codex, destined for a mission in what was then Cathay described by Marco Polo, followed the Silk Road, only to return to Europe many centuries later.

This precious and unique witness became the object of a restoration and study project that involved FSCIRE and the Biblioteca Medicea Laurenziana and which, in addition to the recovery of the manuscript, severely damaged by humidity and wear over time, has resulted in the creation of a precious facsimile and a rich volume of studies conducted by an international team and published by the Istituto dell’Enciclopedia Italiana Giovanni Treccani.

The history and cultural value of this silent global traveler of seven centuries ago make it a witness to the past and, at the same time, a precious vehicle for dialogue today and in the future, and it was admired by the President of the Republic, Giorgio Napolitano.

The In via, in saecula exhibition, with its multilingual panels and video installations, accompanied the Bible on its return journey from Europe to China, a journey that began in Prato on 4 September and continued to the European Parliament in Brussels, to the Istituto di studi storici in Venice, and arriving in Beijing and Shanghai in China. 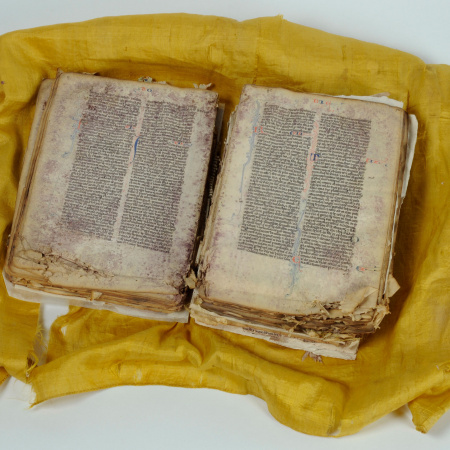 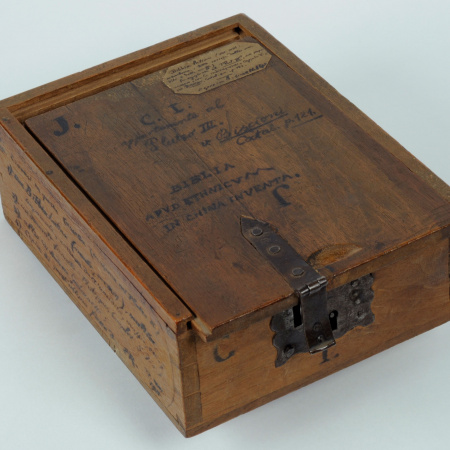