Of international fame and one of the profoundest poetic voices in contemporary photography, Michael Kenna is known not only for his black and white landscapes but also for the atmosphere that his subjects evoke. When in Reggio Emilia, he created a photographic project that focused on the confessionals in some local churches there.

The result of nearly a decade of work, the Confessionali. Reggio Emilia, 2007-2016 exhibition was inaugurated on 4 November 2017 in the Oratory of San Spiridone in Reggio Emilia. It showed 40 shots selected from the 80 that Michael Kenna took during his walks around this city in Emilia, where his interest in the confessionals that he discovered from time to time in the various local churches grew. They became an exciting venture, a new challenge to which the photographer wanted to devote his exclusive attention.

These images of confessionals boxes in Reggio Emilia symbolize what I continue to search for – the invisible within the visible, the intangible contained in the tangible, the illusion of reality. If words, thoughts and emotions could be made visual, these containers of memories would reveal a multitude of densely-packed hidden secrets, confessed, exchanged and discarded in return for some prayers and the blessing and forgiveness of a priest.

The exhibition, under the patronage of the Municipality of Reggio Emilia and the Tuscany Region, was promoted by FSCIRE, which received from Michael Kenna the entire series of the Confessionali of Reggio Emilia. The donation is the result of the contacts between FSCIRE and the artist, rendered possible by the invaluable collaboration of Marta and Tiziano Scalabrini, to whom we are immensely grateful.

The exhibition, organized by Corsiero Editore and Vicolo Folletto Art Factories, curated by Sandro Parmiggiani and arranged by the architect Stefano Lodesani, remained in the oratory of San Spiridone until 26 November. 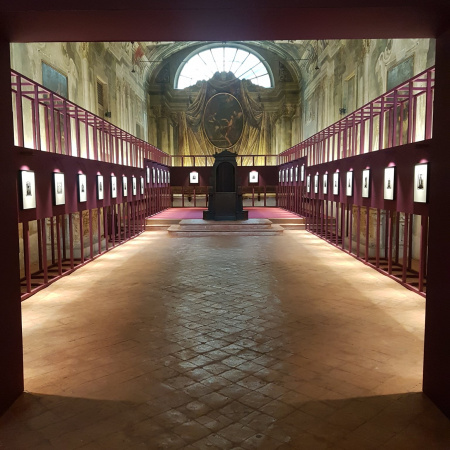